I use Voice Attack for voice control with ED. I have 3 HCS voicepacks installed along with EDDI and 99% of the time it works great! But every once in a while, usually in the heat of combat, the speech engine locks up

I've become so dependent on Astra, Eden and now Celeste that I fumble trying to find the proper keys (if they aren't bound to my X-52 HOTAS).

So I decided to create a task-oriented touch screen interface. I found an old copy of Touch Buddy (http://allaboutorc.net/down/tb.zip), which is apparently no longer supported. I decided to use that software so I could run the client on my Surface tablet which runs Windows 10. I tested the first screen today and it works really well! I plan on creating additional screens each built around a task: combat, exploration, mining, surface operations, etc. Here's a shot of what I have so far: 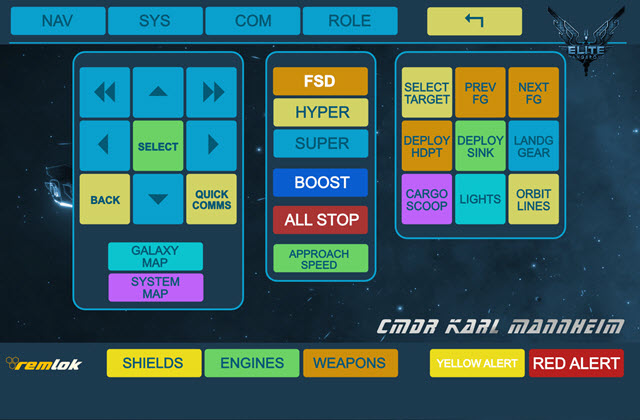 Great, please keep us informed how it goes!
I was planning to do a real-buttons panel but use something like that for the time being. There is an elite-specific touch screen app around (nice orange-style design), I think I posted in the main forums about that. Not tested it yet, though.

Great idea indeed OP! Keep us informed.
Quite hatefull when the speech engine decides to hang up in mid combat... myself I still have most of my buttons programmed on my dual joystick to counter that.
I tested another touchscreen app on my iPad sometime ago ,but that one kinda had some glitches not always sending the commands also so I gave up on it... forgot the name though.
- Cmdr GreenViper -

Arriving in Colonia, first check our MCRN status page for daily updated info on where carto data is needed.
Top

I must have put that link up somewhere......

Thanks for the link Cmdr Kharma! It's working quite well. My Samsung Tab was stolen so I wanted to use the Surface but there aren't many apps available like this for it.

Then it sorta disappeared.....So I uploaded it to my site for download as I thought it might be useful for others.......

Nice to see someone making use of it and a nice screen.......

Return to “Tools and Helpers”

Users browsing this forum: No registered users and 0 guests