In order to clarify some details we have updated our group policy, covering the aspects of the game as it stands now. If and when new gameplay mechanics concerning PvP/PvE are introduced to the game, or we discover a point that needs clarification, it will be added to this policy.

The group's goal is to provide players with an environment to play Elite: Dangerous in a full multiplayer world without having the experience spoiled by non-consensual PvP, ganking, domination, abuse or anti-social behaviour.

To achieve this, all members agree to abide to the rules listed below while playing online in the "Mobius" private group. Of course, the rules apply only to sessions inside the group.

Please be considerate while playing or interacting with other players. We are all reasonable people.
These rules are put in place to clarify some details only. They are not here to start legal wars about how to interpret them.

Please try to solve any disagreement between yourselves first, before reporting any offense to an admin or mod of this forum via PM or the contact form

The group motto translates to "to each their own". So the number one and most important rule is:

Membership of the ElitePvE group:

Once again, the rules are here to clarify some details, not to complicate the game! We want to play together and have fun.
That is the purpose of this game and the group. "To each their own". "Do not spoil another players game", "Don't cheat", "Don't be a dick". 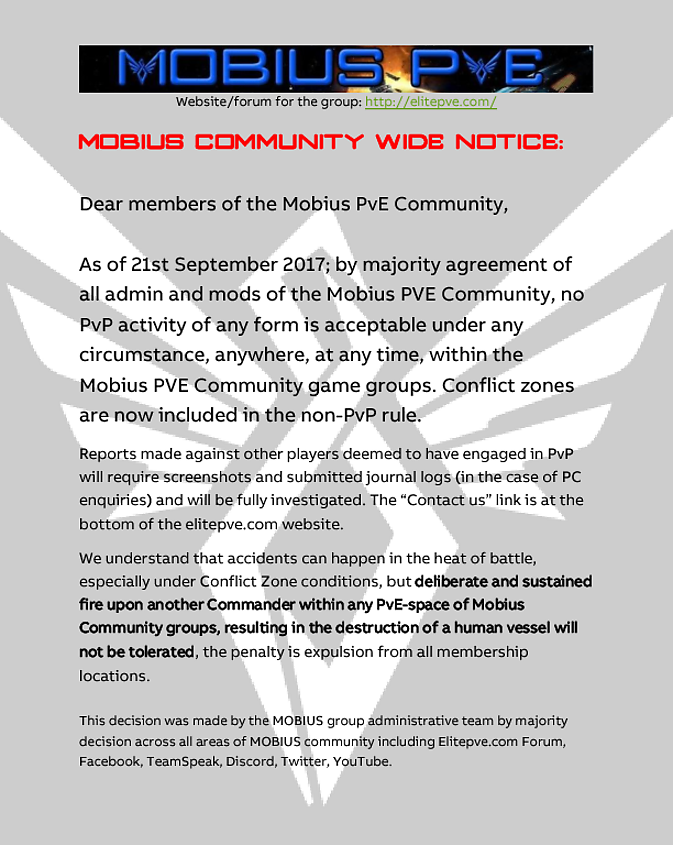