Well, the little pilots can't\won't keep up pressure much, they fire off a salvo, then turns around and retreats, backed up with an absolute lack of ability in managing the pips. Yes that includes all levels.
They either don't do it at all at the lower levels, and really badly at the higher ones, I think it would be better if they kept not doing it.

Not so great with my, sustained DPS Bi-weave resist, builds that I favor and requires being flown precisely "not like that".
Here's my combat focused, multipurpose Krait currently https://s.orbis.zone/8nfQ
With Li Yong discounts its 149 million

And what I'd suppose my deep core Python would look like, honestly I would probably change the top three guns for more mining equipment, you don't fight in a mining build.
https://s.orbis.zone/8nfY

TorTorden wrote:Besides, with mining, you only spawn one potential NPC when you drop into the belt.
Let that scan you and it fucks off, and you can fill your hold to your hearts content.

But it is true that you don't ever need to fight them except by choice as there are other options for avoiding combat. If you do get a wing though be aware that as long as they are around any member can scan you so if it is a wing of 3 you will need all 3 to scan you, or wait for the wing to leave. 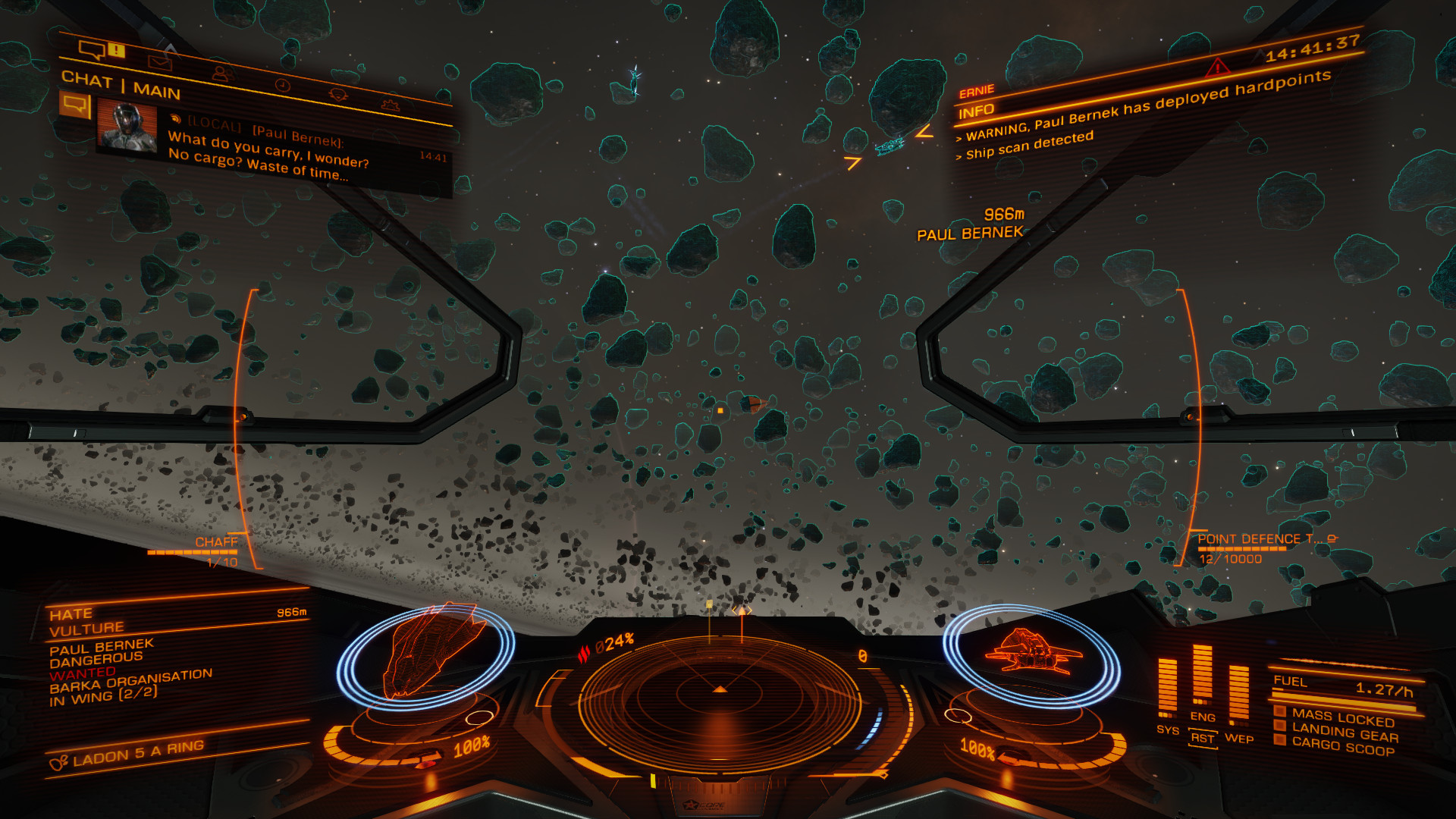 Python rigged for mining will have go build one after I fill the Cutter up with mining goodies my third a final trip doing that since last week. I found a place to park a fleet carrier after I buy one stumble-upon a small system dropping of mission cargo at an outpost it has 3 ringed planets with one planet having 37 hot-spots .

TorTorden wrote:Besides, with mining, you only spawn one potential NPC when you drop into the belt.
Let that scan you and it fucks off, and you can fill your hold to your hearts content.

That has to actually do with your ship type, with a ship considered "combat" the game will spawn more combat npc's, than if you where in a cargo or multipurpose ship like a python, or a cutter.

This game is pretty much a sequence of facepalms after a while.

But not really a problem, they only spawn when making the transition between cruise and the belt.
You let them scan you empty and they tootle off, whinging about their starving kids.
Was a time they went completely off on you if you even had a limpet on board ..

TorTorden wrote: Was a time they went completely off on you if you even had a limpet on board ..

Yeah I remember that it also included interdiction at the sun some players would turn their ship around forcing the ship to attack from behind and burn up or was that a porky pie (lie)? Show up at a HAZ RES with a limpet and get attacked difficult to survive there then.

For last 2 weeks I been mostly filling the Cutter up with mining goodies. I have sufficient credits to buy a Carrier. Anyone with some do's and don't tips or two willing to share I thank-you in advance.
regards

I already have a "A" rated/engineered Python she should do, right?

Enough for a carrier is at minimum 12 billion.
Less than that really won't be comfortable.
Just filling the gas tank is 40-50 million, on top of upkeep.
Filling the hold with additional fuel would be 10x that.

Skip the ships hangar and outfitting, you as the owner get those for free,
Unless you have an active group of people to play with that will rely on it, even if you do 9 of 10 will still just use stations.

And just those two services adds 11 mil to the weekly upkeep.

Get refuel, rearm, and repair.
The bounty offices are worthless, if you collect bounties from hunting your in the cash in system already, the only thing that service does is take 25% and burn it.

But in all honesty the fc's are pure money sucks pretty much every system in game with anything going on, like a res site or a war will have 20-30 of them parked.
You need limpets?
I bet there is already 5 carriers orbiting your exact ring where you can get them.

They are also so utterly lacking in management tools to the point of tragedy.
There is no way to tell if anyone has docked at it, there's is no way to contact these people, or for them to contact you, if they store and ships or modules there is no way for you to know they are there.
Meaning you can jump away with someones ships none the wiser with 10 minutes ingame warning as the only way for anyone to know what's up, and that's only if they are logged in at your carrier.

This alone means no one in their sane mind will log off in a carrier or even use one to store anything.

Even if it is used for mining and you fill up on goodies the hold capacity, even if you switch into a python to sell, you would saturate the market value soon, and you would make less per ton.
You can take your time and ween it out, but that wouldn't be any different than mining without a carrier.

Currently as the game is.
I honestly don't see any reason to get one apart from the fact it exists to get.

I honestly think I'm decomissioning mine soon.
Then again what else are we going to spend the money on?
It's not like they ever introduce any actually usefull ships anymore.

If they gave me the option, I would take three more srv's over the carrier as a feature.

Thanks Tor, really good summary full of lots of good information appreciate you taking the time to reply. I knew the cost are high am surprised 12 billion is not a comfortable figure I am definitively uncomfortable with that number 45-50 million to fill a gas tank a fookin tad high. Covid-19 has caused oil prices to decline

This is reading like a headache is pending I thought you buy a FC outfit it so it looked like a glossy shiny new pair shoes. Go park it in a high traffic area and rake in the gold. Appears not to be the case Will think about a Carrier currently harvesting USS' in engineer space then SRV around on their planets topping up on spent upgrade material. Good point on what to do with credits I am going to let them collect dust like a few ships I own. One day we may get useful ships. Thanks again.

I suggest a Python or Krait Mk II too. The Python fully A-rated might cost up to 200 million, but it is worth any penny!

Armored monster or thermal spread for the plant and charge enhanced cluster capacitor for CAP.

“In real life you never get to say "OMG I died, balls to wall and fly her apart.”
Top
Post Reply
20 posts

Return to “Gameplay and Features”