The narrow galaxy elegantly curving around its spherical companion in this image is a fantastic example of a truly strange and very rare phenomenon. This image, taken with the NASA/ESA Hubble Space Telescope, depicts GAL-CLUS-022058s, located in the southern hemisphere constellation of Fornax (the Furnace). GAL-CLUS-022058s is the largest and one of the most complete Einstein rings ever discovered in our universe. The object has been nicknamed by astronomers studying this Einstein ring as the "Molten Ring," which alludes to its appearance and host constellation. (ESA/Hubble & NASA) 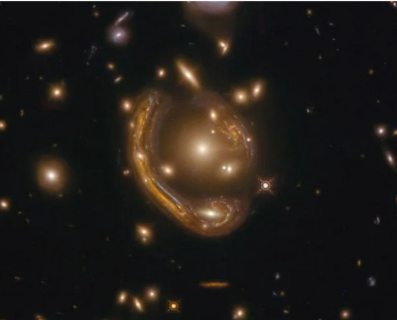 Re: “Molten Ring” that Hubble saw

Wow, that's amazing. Thanks for sharing!